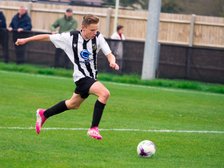 Win Secured in the First Half by the U15 Colts

Devastating first half and a hatrick from George Masters (pictured) see the U15 Colts come away with 3 points.

Today was the Under 15 Colts first away (played) game of the season, our hosts, Leatherhead Youth. This team was an unknown quantity but it was noted that they had managed to obtain points from some strong teams in the league so far that we are more than aware of, so we knew it was going to be a tough game.

Abbey started the match with their usual formation but were without vital centre back James Lawson, who is unfortunately is out of action for the foreseeable future, much to the player and coaches disappointment. However, Jack Lynch came in to make his league debut for the Colts which was a welcomed addition.

It took a while for the Colts to get into any sort of rhythm once the game had started, some loose balls played here and there gave Leatherhead the opportunity to carve out some chances but they were unable to punish Abbey. Instead it was Abbey that then started to shift through the gears and on 11 minutes Anthony McGovern picked up the ball in the centre circle and weaved his way into the oppositions half, passed the ball out to the right where George Masters collected it and drove into the box. As soon as George got the ball onto his left foot the outcome was inevitable and sure enough it was curled into the top left of the goal, 0-1 Abbey Rangers.

5 minutes later again George Masters picked up the ball again, this time on the left where once into the box he tried to cross it but the ball hit the trailing arm of the defender......penalty.!! George took the spot kick and calmly slotted it home to make it 0-2 to Abbey.

Abbey continued to dominate the game, although Leatherhead were very technical team and sprayed the ball out to the left and right wings well, they were however unable to deal with Abbeys strength and power. On 28 Minutes Abbey were awarded a free kick about 20 yards out and Joe Sandell stepped up to take it. He hit the target with a well struck shot but the keeper made a excellent save but unfortunately palmed it into the path of Antwone Brown who riffled it into the top of the net, very well taken goal on the half volley, 0-3 Abbey.

It only took another 9 minutes for Abbey to score again, this time a long ball from Samuel Allen eluded the defence of Leatherhead and Antwone was there to punish the mistake. He dribbled into the box but the keeper was equal to the shot and made a great save, however again Abbey were quickest to the rebound and George Master was there to slot it home, 0-4 Abbey.

In the second half Abbey failed to score again, despite coming close a couple of times. Abbey were also down to 10 men on 54 minutes when Luca Sorce was unfairly sent off. So the remaining minutes of the second half was all about game management and keeping the clean sheet, which Abbey achieved.

Final score 0-4 and a good three points on the board.

MOM- Jack Lynch, with the absence of James, Jack seamlessly slotted into the defence. He defended like a machine today and dealt with some tricky players clearing his lines well. He also cleared one off the line which seemed all but in. A great debut performance and we hope to see him available more for the Colts.