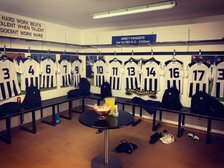 A Day to Remember for the Colts

A Day to Remember for the Colts

Today we thanked our ever supportive sponsor Mayfair We Care by giving the boys a fixture that I hope will be remembered in their footballing careers forever.

It was kindly agreed that for the first time the under 14 colts could play on the mens pitch, using all the facilities including the dressing room. We received our new kit this week, thanks to our sponsor Mayfair, and we used it as an opportunity to present it to the boys.

The coaches only fear was that all the hype would be a distractions for what we needed to do on the pitch against a good Hampton & Richmond side.

After all the photos had been taken and warm up done, the team was led out through the tunnel by team captain George Kitchen, and it was time to focus.

The game kicked off with a record attendance of 75 and Abbey was slow to get out of the blocks. The first 10-15 minutes Hampton & Richmond took advance of this dominating play and in the first 5 minutes nearly scored when their striker got through but failed to finish.

Slowly but surely the Colts got into their groove and then started to take control of the game. The pitch was huge and it just took time for them to get use to it. It wasn't until the 30th minute when Antwone Brown sprayed the ball beautifully out to George Masters on the left who had a lot to do and charged towards the goal hitting the ball low and hard giving the keeper no chance, 1-0 Abbey.

The Colts did soak up a bit of pressure at the end of the first half but we went in 1-0 up. The coaches instructions to the players was to ensure we keep the pressure and work rate up. We also needed to be first to the ball which we were doing well in the first half.

The second half kicked off and Abbey started to get into their flow more. Yes Hampton & Richmond looked dangerous when they broke with their number 10 who certainly made James Lawson work today, but it came to no avail.

Due to Abbey's dominance in the middle of the park they were awarded with a second goal on 39 minutes when Antwone Brown put a looping ball through to Carson Curtis who easily beat the defence and then lobbed the ball over the keeper, 2-0 Abbey.

The battling continued and when you are first to the ball and shut down quickly you take control of the game, which is what Abbey did. On the 60th minutes, and for the second time in the game, the ball was moved from right to left where Antwone Brown picked it up and slotted it through to George Masters who smashed it pass the keeper for his brace and Antwones hatrick of assists, 3-0!

Abbey at that this point seemed like they wanted more and on 64 minutes a corner was put in by George Masters which was cleared and found George Kitchen on the edge of the box. He took a strike but lent slightly back on it and it unfortunately went over, which would have been a very rare goal for him.

Abbey wasn't finished there because on the 67th minute George Masters collected the ball again just outside the box and took a strike which smashed off the cross bar.

The final whistle soon went after that and what a day and what a performance. Yes we were slow out of the blocks but the boys executed our instructions well and they all worked hard. The pitch was huge and the win was well deserved. Even more pleasing was to keep a clean sheet .

I want to thank the club and the helpers that assisted us today. It was amazing and I know the boys enjoyed themselves so much. A true day to remember!

MoM- Carson Curtis, had the beating of their defence with ease today, worked hard, headering was on point and all topped off with a goal with a fine finish

Player of the match